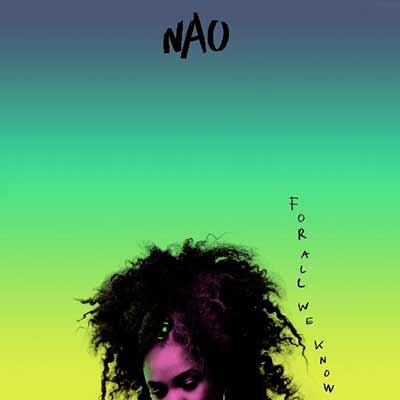 For All We Know

NAO’s debut record is finally here: For All We Know is an immense record that defies R&B’s current conventions and dares to think bigger, perhaps lighting a fire under the genre as she goes. It’s mandatory listening.

NAO’s debut feature-length, For All We Know, is sensational and essential, but it would be unfair to call it her debut. She’s been cutting EPs for years, one of her most recent being February’s spectacular February 15 — EP (which dropped in February 2015, of course). Some of the songs from these EPs and singles, like “Bad Blood” and “Inhale Exhale”, have drifted over to her debut.

But it’s more than the sensational songwriting and her velvety voice that makes NAO’s debut stand out from the rest of the pack. Her approach to R&B is so different from that of her contemporaries that it’s hard to ignore.

Hailing from the UK, where most of her peers are aiming for the sound du jour of minimalistic R&B, NAO’s style is densely layered and sonically maximal. She doesn’t bother with stripping back; instead, it feels like she throws every one of her ideas at the record and only removes them if they don’t stick.

That’s evident even in her vocal stylings: as a trained jazz singer, NAO brings a vocal sensibility to the genre that feels more like the complex pop attitude of Janet Jackson crossed with the deep soul of Aretha Franklin. She brings jazz’s off-beat melodies and accents, but hits those beats with her voice instead of a saxophone. It’s incredibly effective.

It raises multiple questions, but the most important of them is about labelling the record. Is it fair to call For All We Know R&B when it’s so deeply rooted in jazz and soul as well? I’d argue that it is — as often as the rules of the genre are broken, they’re also embraced.

What’s most powerful, I think, is the way that NAO removes the autobiographical element of so many current R&B records, and replaces them with massive female-driven moments of power. Clearly taking inspiration from women like Beyoncé, there are moments throughout the record when For All We Know feels more like a call to feminism and self-respect than it does anything else.

If NAO’s debut has any problems, though, it’s the sheer length of the record. It’s not that the songs are bad; it’s that many of the fine songs (like “Adore You”) are outpaced by the magic of tracks like “Fool to Love”, “Girlfriend” and “In the Morning” (a personal favourite of mine). It’s a long record that could have been improved by NAO making some choices on the editing floor (although what she could have cut, I don’t know).

With all that being said, NAO’s debut record is interesting because it has the dramatic length and pacing — as well as story-telling capability — of 90s hip-hop. But it’s also got the technique of jazz, the trappings of R&B, and the impossible-to-ignore sympathies of great soul. All guided by NAO’s sensational voice.

It’s hard not to recommend NAO as one of the year’s standout records in any genre. Unlike her peers in R&B, NAO isn’t going for minimalism. She’s gunning for stardom, and with massive talent and equally massive hooks, it’s going to be hard for her to miss.