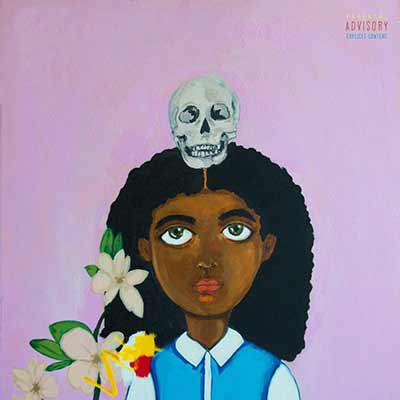 Fatimah Warner is going places. Better known as Noname, the Chicago rapper was introduced to hip hop fans on Chance the Rapper’s 2013 mixtape, Acid Rap. (She performed on “Lost”.) Her debut mixtape is a sunny moment in the year’s hip hop and features a wide host of stellar guest experiences.

There’s a reason people love mixtapes. They’re fast and lose, and often bursting with the creative energy of an aspiring and hungry guest list. Noname’s record harkens back to the brilliance of the early Chance the Rapper mixtapes, and to a certain extent, Kanye West’s early records.

Despite that, there’s a clear difference here: Noname’s gender is an obvious differentiator. There’s a dearth of women in hip hop. It’s a stain on a genre that needs to be spending more time celebrating its diversity.

As a result, Telefone is a massive breath of fresh air. Noname is an excellent rapper, and her voice is easy to listen to.

There are so many standout tracks on the record. It would be shockingly easy to write something positive about every track. “Yesterday”’s breezy piano is charming. “Sunny Duet” is melodically stunning; “sunny” is a perfect descriptor.

For my money, though, “Diddy Bop” is the earliest standout track that might buy Noname more of an audience. The guest spot from Raury (who’s one of my favourite up-and-coming rappers) is great. The two of them have a similar style; their beats often feel like they straddle the sometimes-thin line between hip hop and R&B.

They both also share another important vocal quality. Noname, not unlike Raury (or Chance the Rapper), floats over her beats. Even when she’s being more rhythmic with her intonations, like on “Reality Check” (which features the sensational Eryn Allen Kane), it sounds easy and natural.

Like many Chicagoans before her, Noname is naturally proud of her city. But it feels like she’s more aware of its darker side, perhaps because she’s a woman. “Casket Pretty” is a heavy song about how many of her friends end up in caskets, and how “nobody’s safe in her happy city.”

That ironic twist is both a clever and sad line. The song is a telling moment for Noname: she’s not just incredibly skilled, but also self-aware in ways that some of her peers aren’t.

I would be remiss not to mention the mixtape’s closer, “Shadow Man”. I don’t have words to describe my affection for this piece. It’s the longest, most fulfilling track on the record. There’s a beautiful moment on the record that’s heavenly, and Noname never feels more on beat.

There’s a remarkable amount of restraint on Telefone. Noname saves the best track for last. But she also raps at the right times, and somehow “floats” when it’s appropriate. She opens the doors to collaborate with peers, and isn’t afraid to give them the space to do their own thing.

Noname is the most exciting rapper since Raury and Chance the Rapper. Telefone is sensational. It’s unfair to say this so early in her career, so I want to make it clear that I mean this to be encouraging and hopeful — but I desperately want to see Fatimah become the female role model in hip hop.

She could actually do it.