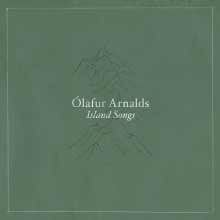 On Island Songs, Ólafur embraces his piano and writes a peaceful set of songs meant to evoke his homeland of Iceland.

Island Songs is another beautiful record from Ólafur Arnalds. But it’s surprising because it sounds like the Icelandic-influenced record that Arnalds’ peer, Nils Frahm, would write: largely quiet piano-based songs that channel Iceland’s sparseness and tranquility.

No doubt this is intentional: “sparse” is the best word to describe the record, which features few vocal moments — and almost entirely for effect. Although Arnalds doesn’t replace every instrument with a piano — he still uses much of his string accompaniments — this record sounds entirely organic (and beautiful). It eschews much of the classical looping of his past efforts.

Ólafur still loops his instruments, though: “1995” is, fundamentally, a couple of loops that twist and turn around each other until the song is over. But on Island Songs, the loops aren’t made up of electronic noises or beats. There’s nary a beat to be found on the EP; it finds its rhythms through the sounds of the island.

There’s only one song on the EP that features a traditional vocal performance. “Particles” feels almost entirely different from the rest of the record, particularly because its beat is less implied and more forceful than the other songs. Nanna Bryndís Hilmarsdóttir’s vocal performance, though, feels like it does the work of four or five instruments, capturing the same vibe that Arnalds is working with throughout the rest of the record almost entirely on her own.

Her vocal work couldn’t come at a better time: Island Songs is perhaps purposefully similar throughout, with many songs sounding like riffs on a theme instead of separate ideas. While album closer “Doria” is the major key complement to the minor key opener, “Árbakkinn”, it retains many of the same musical ideas. This is purposeful: Island Songs captures the near-monochromatic beauty of Iceland’s vistas by making these tracks similar.

As a result, there’s no clear idea of where the record ends and where it begins; much like the island’s ecosystems, they fade in and out of each other. While each is individual enough on its own, they’re all clearly connected.

Island Songs is two things: entirely beautiful and completely focused. You’re not likely to hear a more focused EP this year, and Arnalds delivers the goods in spades. Island Songs is perhaps my favourite work from Ólafur to date.