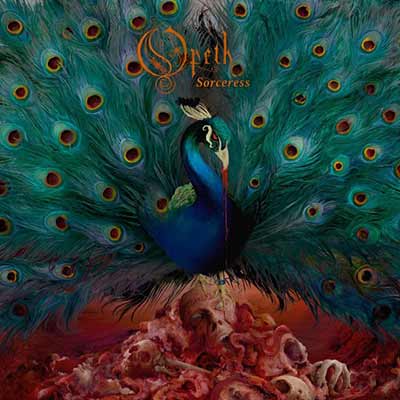 More than twenty-five years into their career, it feels like a sin to call Opeth a metal band. Sorceress continues their trip into experimental prog rock, and the band finally sounds comfortable.

I still remember the buzz when Ghost Reveries came out over a decade ago. At the time, Opeth was the smartest band in death metal. Lead singer Mikael Äkerfeldt was one of the best in the genre, able to jump without hesitation from death growls to opera soars. The record was unlike anything else at the time.

I use the past tense because Opeth doesn’t make death metal anymore. Sorceress is their third prog rock record. The band is more interested in musical ideas than they are in pure intensity. There isn’t any screaming on Sorceress, and the music is less aggressive than it’s ever been. (And yes, Äkerfeldt may still be one of the best singers in the genre’s history.)

With Sorceress, the band has finally grown comfortable with the sound. This is the best they’ve sounded in ten years. Äkerfeldt has developed a soundscape that brings constant variety to the band’s compositions, without making the music less challenging or absorbing.

No two tracks on Sorceress sound the same. The title track, with all its pummelling rivers, is completely different from “The Wilde Flowers” or the gorgeous “Will O The Wisp”. The songs share lyrical themes about failure and poisoned love, but they rarely share musical ideas. While most musicians write love songs, Opeth writes about love as obsession.

There’s a metaphor to be made here about the band’s songwriting, which reflects an obsession with the new. “Time waits for no one,” Mikael sings on “Will O The Wisp”. “It heals them when you die. And soon you are forgotten, a whisper within a sigh.” It’s often hard to separate Opeth’s music and lyrics from their fear of stagnation and death. They would rather reinvent themselves.

But Opeth struggles to reinvent themselves on this go-around. What hasn’t the band done at this point? If there’s a single noteworthy addition to the band’s sound, it’s a newfound appreciation for jazz.

“I started listening to jazz and bought a lot of Coltrane records,” Äkerfeldt explained in a press release.  “I never really thought Coltrane would be for me because I like ‘dinner jazz.’ Like Miles Davis’ ’50s stuff.” That transition is obvious on Sorceress. Structurally and musically, there’s more than a passing resemblance at time to John Coltrane and other heroes of jazz’s golden era. “Strange Brew” was an obvious ode to Miles Davis’ later work, as well as Coltrane.

“The Seventh Sojourn” experiments with many of the same Eastern sounds that the jazz greats experimented with decades ago. (The track could double for a film soundtrack.) Even on tracks like “Era” or “Chrysalis”, which experiment by combining jazz and rock, the band embraces experimentation and intensity without returning to old habits. They’re better for it.

The difference here between this and the last Opeth record is more subtle than ever before, but it’s noticeable if you know what to look for. But three albums into Äkerfeldt’s new vision for the band, it’s clear that nothing is safe.

Sorceress is the band’s third prog rock record,and they sound more comfortable than ever before. It’s also the band’s first record with Nuclear Blast, one of metal’s most prominent labels. But the new label doesn’t restrict them: the band continues to experiment with new sounds and styles.

For some fans, Sorceress may allow them to embrace the Acceptance phase of grief in Opeth’s new sound. But there’s a maturity here that no longer sounds like experimentation for the sake of experimentation. Simply put, it sounds like Opeth is finally comfortable being themselves. The music is great, but the band’s attitude is refreshing.