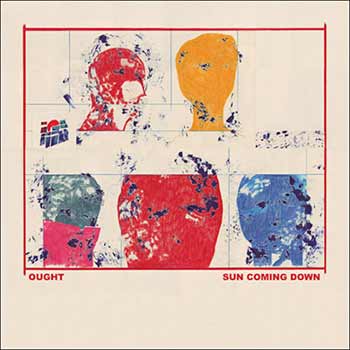 Ought’s Sun Coming Down has all the trappings of a considerable punk classic, but it’s a 2015 release from a Canadian rock band that seems intent on adding a sense of depth to their satire. An altogether unusual, but engrossing, punk record.

Ought is a group from Montreal that doesn’t sound like Arcade Fire, which is totally refreshing. The post-punk group is releasing their fourth record, but it’s actually their third in two years.

And you can tell these guys are not afraid to experiment with the genre. (Having the freedom of calling yourself “post”-anything really just lets you throw rules out the window and do whatever you feel like.) They’re also clearly comfortable in the studio now.

The record’s production is incredibly punk — everything is clear, so it’s not a grungy punk sound — but nothing is overly produced. It just sounds like a bunch of guys hanging out in a good-sounding garage, playing a few lo-fi punk songs. When they pull back on the punk, they get chilled. And when they go back to the punk, they throw out the established raw power chords of the genre and replace with them with fresh ideas and new takes on a crowded scene.

And that’s exactly what’s so charming about Ought. Unlike a group like Royal Headache, who are putting the punk back in punk rock, these guys are going for a laid-back approach. This is by no means a quiet record, or one that lacks any power. But it strips the raw power and rules away from the music and adds a sense of intimacy, all without losing a sense of where punk came from.