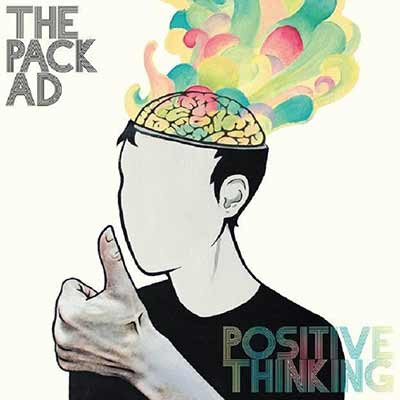 The Pack A.D. drift further away from their blues-rock roots into alt-rock territory on Positive Thinking, but they avoid sounding like their influences and continue to surprise — while developing a striking musical identity of their own.

There’s a moment on “Yes, I Know”, the second track of Positive Thinking, that sums up exactly how I feel about the record. It’s right when the chorus comes in.

Let me give a little bit of context: Positive Thinking is a garage record that reminds me of White Stripes, but also Wolfmother. And the guitar fuzz, as well as the pre-chorus melody, remind me of one of the tracks from Wolfmother’s debut album.

When the pre-chorus comes in on “Yes, I Know”, my brain fills in the next blank from the memory of the Wolfmother song. The chorus I expect is the logical choice for a garage rock band to make; it would be a return to the key’s first note — the song’s pulse.

But The Pack A.D. go the opposite way, leaving the song in unresolved tension — and completely surprising me.

That whole scenario happens seemingly countless times on Positive Thinking: I’ll recognize the influence, I’ll know what comes next based on my expectations, and then The Pack A.D. does something else — every time. Whether it’s “Yes, I Know”, or the Misfits-influenced “Teenage Crime”, or even the Hives-influenced “Los Angeles”, the duo continues to sidestep my expectations.

If you don’t know The Pack A.D. very well, you might be surprised to find out the band has just two members: a drummer and guitarist/singer. They make a raucous amount of noise for two people, sounding much larger than they are. That’s one of the things they’re known for.

They’re also known for their energetic live shows, which you can tell Positive Thinking has been made for. With rare exception, these songs are loaded with punk-like attitudes that work well on the stage.

The jury’s out, though, on whether or not Positive Thinking is The Pack A.D.’s best record. It doesn’t matter, though: six albums in, The Pack A.D. is a completely different band from how they started, and it feels like they’ve fully embraced the alt-rock sound and more or less ditched their blues influence altogether.