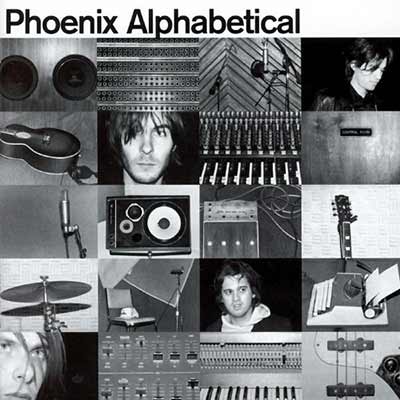 A long-forgotten Phoenix record, Alphabetical is a classic that proves the band didn’t come out of nowhere. Every song on this record, as different from Wolfgang Amadeus as they are, is an absolute treat.

Most people know who Phoenix are. If you’re not, I guarantee you’ve heard their songs from their past couple records. Their most recent album, Bankrupt, was a disappointment for me. But everybody’s heard Wolfgang Amadeus at this point — especially if you like to dance at clubs. But what most people don’t know is that before these guys made stunning electronic pop, they made some great alternative music that’s better than almost all the alternative music you’re hearing on the radio right now.

Listen to Everything Is Everything — its opening lines immediately set the tone for what’s by far the most surprising Phoenix song you’ve ever heard if you’ve only heard their recent work (anything from and since It’s Never Been Like That):

Things are gonna change,
And not for better.
Don’t know what it means to me,
But it’s hopeless, hopeless.

The song is really well-written from a musical standpoint, and utterly refreshing to hear Phoenix doing something like this after getting used to their electronic pop. (Even long-time listeners will appreciate this trip down memory lane.) The whole album just flies by.

Run Run Run is great, and reminds me of some off-the-wall post–2000s alternative rock we used to always hear. I’m An Actor is seriously influenced, believe it or not, by Green Day (and you’ll know exactly what I mean when you hear it).

(You Can’t Blame It On) Anybody hints at what was to come from Phoenix later, as does Holdin’ On Together. And considering it’s the titular track, Alphabetical is surprisingly slow and introspective.

When you’re done listening to the whole album, you’re going to want to listen again. My advice? Just start at the beginning and hit the Repeat All button. Save yourself the trouble in advance.