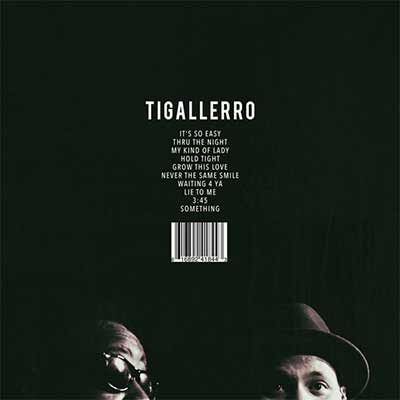 Soul performer Eric Roberson and rapper Phonte make an astonishingly excellent pair on Tigallero, one of the year’s classiest — and freshest — neo-soul records.

Tigallero is a classy record. And while it does some fresh-sounding stuff with modern soul, it feels like it belongs with the genre’s best vintage material. That’s largely thanks to the lyrics and the vocal performances, which are both truly special.

The lyrics here are romantic and smooth, echoing the best of what soul and R&B has to offer. Almost every song feels like something that would work well on a classy date night. It feels all too rare that a good album with an air of romance comes out, and this is one of them.

The duo that makes this work is neo-soul singer Eric Roberson and rapper Phonte. It’s a surprisingly potent mix: while the backing tracks are decidedly R&B, Roberson is able to elevate his parts to feel like soul. Phonte’s raps make the album feel like classic hip hop, but he’s never abrasive. His vocals are as smooth as Roberson’s.

It’s astonishing how well these two voices work together. You needn’t look further than the first track, “It’s so Easy.” The second verse sees the duo swapping vocal parts, with Roberson rhythmically singing his part and Phonte joining in halfway through. When they swap, you might not even notice it because it’s so smooth.

It’s not a trick that gets old. “My Kinda Lady” has a similar feel, with the swap handled well. It’s a poor word because it’s so vague, but “classy” is the only word I have to describe music like this. It’s clear that Roberson and Phonte have a rapport here, and that the two have left their egos at the door.

Some tracks, like “My Kinda Lady” and “It’s so Easy” feel led by Roberson, but others swap the roles. I love “Lie to Me,” which feels like a Phonte-led track despite Roberson’s heavy presence. On others, they share the lead: “Grow This Love” features Phonte carrying the chorus’s backbone while Roberson sings the lead. It makes the duo sound bigger than they are.

Roberson’s vocals largely dominate the record, which is an important note because it speaks to what Tigallero is supposed to be: a modern neo-soul record with elements of hip hop. Fans of Phonte might find him under-utilized, but it feels like the record has exactly enough of him.

For me, Tigallero is a breath of fresh air: it’s got the soul of a vintage R&B record, but the modern approach of two masters at the top of their game. It’s fresh, despite some of the trappings of yesteryear, and the vocal performances are fantastic. More than once, Tigallero reminded me of a classier Justin Timberlake at his prime (and I mean that in the most complimentary way possible).

Compared to some of this year’s other standout releases, Tigallero’s release is rather quiet. But the songwriting is quality, and the performances are excellent. Phonte & Roberson call Tigallero a “project,” which implies — at least to me — that this could be a one-off record.

I hope that’s not the case, because this is the sort of collaboration that I’d like to see continue. Both artists leave their egos at the door and focus on putting out great, fresh music. It’s the rare musical partnership that works because the artists complement each other — it’s not a competition. And I’ve lot to hear more from them.