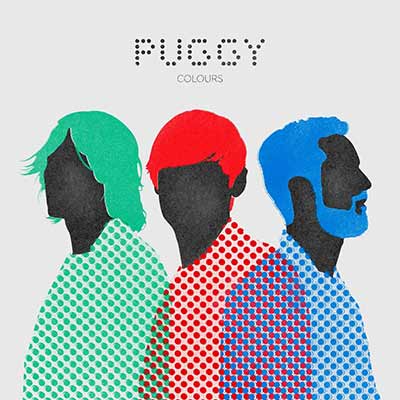 Puggy’s third album continues the group’s penchant for catchy alt-pop hooks and fun dance tracks that will appear to people who are tired of constant synths.

There’s a sense of joy in Puggy’s music that feels unabashedly unapologetic. Colours, their third album, continues to show off a playful and exuberant side of alt-pop that’s refreshing next to many of today’s sad alt-R&B crooners. From Change the Colours, the album’s opening track, you know that you’re in for a treat.

The thing that I really like about Puggy is that they don’t over-indulge the synths. Maybe it’s because I grew up listening to rock and roll, but I love the way that Puggy functions as a rock trio who happen to make pop music and invest heavily in hooks.

This formula doesn’t always work — the album isn’t perfect, and there are some odd tracks here and there — but more often than not, you have a record that’s perfect for highway driving in the summer. The chorus in Soul is so easy to pick up and sing that my wife got it after hearing it once, and we sang along together like a couple idiots while driving to visit my parents recently.

Other tracks are great because they feel like alt-rock dance tracks. Where It Wants to Be is great because it has an awesome riff, but you still want to move your hips and dance with it. It reminds me of Jukebox the Ghost (in the best way possible).

I could say the same thing about Feel so Low, a country-influenced dance track that borrows the a-rhythmic claps from Radiohead’s The King of Limbs and its attitude from old-school country and Django Reinhardt-style chord changes.

The album’s quieter tracks don’t work as well. Sadly, there are too many of them in the mid-section that brings the album down. But the final three tracks are fantastic. I’m particularly fond of Territory, which is a surprisingly aggressive track that doesn’t fail to hold its audience captive. The chorus is so different from the rest of the record that it’s almost shocking.

If it were packaged as an EP with a collection of its biggest crowd-pleasers, Colours would be among the year’s best short spurts. As it is, it’s a refreshing listen that’s perfectly suited for summer parties and jamming out in the car. And sometimes, that’s exactly what you need.