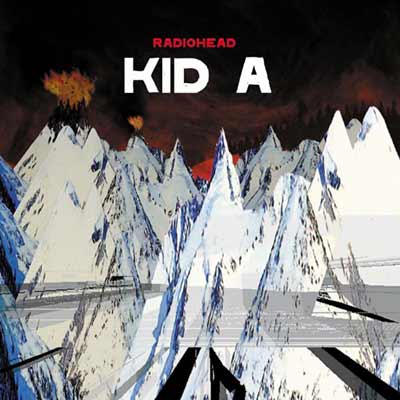 If OK Computer was responsible for taking Radiohead to a new level of creativity, Kid A announced they refused to settle and were here to stay, solidifying them as the band’s most important and commercially successful art rock band.

It had been three long years since OK Computer came out, but the band wasn’t going to wait long before releasing what many critics would believe is the most important album of the 2000s. Kid A was polarizing when it first came out, but now the consensus is clear: you’re not one of the cool kids unless this is your favourite Radiohead album.

And that’s not without merit. The story behind the album is as fascinating as the record itself. Thom Yorke and the rest of the band all seemed to suffer massive paranoia about OK Computer’s dominance, and had an interest in sounding like anything other than themselves. Playing music became depressing. Guitar-based rock became insufferably boring for them, if only because they felt they were adding to the noise, and they began to listen to a lot of music from Warp Records, like electronica legends Autechre and Aphex Twin.

I’ve come to understand that Radiohead is a band whose basic interest is subverting itself, rebelling against everything it stands for from one record to the next. Kid A fits into that narrative nicely. It’s an electronic record made to be the exact opposite of what OK Computer was. Kid A is an open embrace to technology.

Everything in Its Right Place is a hauntingly beautiful opener. The National Anthem is one of the most memorable Radiohead tracks, a true deep cut that fans everywhere love — largely because of its mid-track instrumental breakdown that sounds like Miles Davis going insane during the making of Bitches Brew.

In that sense, while OK Computer aspired to take influence from jazz musicians like Miles Davis, Kid A aspires to be as good as those records. It’s a stunning accomplishment, because the record largely achieves the same density of texture and sonic mayhem, despite Radiohead’s experimentation with new musical forms and sounds.

That experimentation is littered throughout the record. There are no “cute” tracks, no Fitter Happier’s. Yorke’s voice is barely intelligible; his goal is simply to blend in with the music and become part of the instrumentation.

(As an aside: this is the first record I’m aware of where a vocalist intentionally buries himself in order to become one with the instruments. It had certainly happened before, but it seems only by accident. Early Black Sabbath records, for example, are often cited for their power thanks to Ozzy Osbourne’s monotonous vocal delivery; his voice blends in with the instrument and makes it sound even more like a wall of doom. But the thing is, the only reason he sang like that was because he couldn’t sing. It wasn’t by choice. In that sense, Thom Yorke is breaking grounds here by doing something similar for artistic reasons.)

There are few tracks on Kid A that sound conventional, to what I’m sure was likely Capitol Records’ chagrin. How to Disappear Completely is perhaps the most straightforward track on the album, but it’s hardly “easy.” Similarly, Optimistic isn’t too different from some of the howling angst present on OK Computer, but in hindsight, it feels like Optimistic is perhaps more sarcastically despondent than anything from that record.

Idioteque and Motion Picture Soundtrack feel like two of Radiohead’s most undeniable accomplishments. These tracks are utterly and inescapably inventive and powerful, particularly for their time.

It’s fun to look back at these records now and consider their importance: even Radiohead, despite all their rebellion against themselves, can’t avoid coming back to Kid A time and time again. So many of their recent tracks sound like they were written around the same time as Kid A, as if the album is a blueprint for music and sound that they can’t find a way to escape from.

Perhaps it’s because in trying to do something different, in looking for a way to escape the ordinary, Radiohead found a sound that is simply extraordinary and wholly them. Few artists, if any, have been able to really steal from the Kid A sound — at least, not successfully. It feels like the maturation of Radiohead, and also like the whole of their purpose, the big reveal of their identity.

If that all sounds grandiose, it might be because it’s impossible to talk about Radiohead in anything less than grandiose terms because their albums are so much larger than life. If OK Computer was their Sgt. Pepper, then Kid A is their Abbey Road: an album that dares to embrace everything that makes them unique and explore it, mining it for its best ideas and creative concepts.