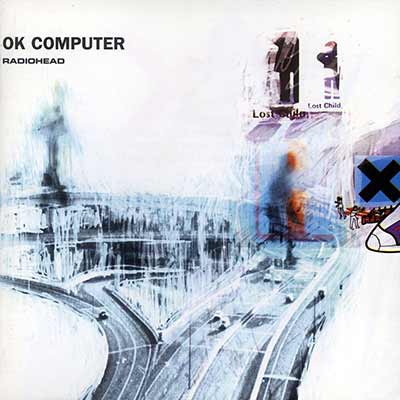 For most of us, OK Computer was the album that really started it all: it’s the record that propelled Radiohead from radio rock and launched them into the stratosphere.

OK Computer has an edge to it than Radiohead’s previous work, even at their most depressing (Creep, My Iron Lung, or Sulk), simply does not have. It’s a typically sad Radiohead record, but it’s also incredibly angsty: the band’s palpable irritation with the world is matched perhaps only by Nirvana’s Nevermind.

And it sounds like they’re angry about everything: technology, trains, police, the upcoming new millennium (OK Computer was released in 1997), and… Well, so much more. While their rage is sometimes felt through raw power (Paranoid Android’s guitar parts are mind-numbing), they’re just as often likely to explore nuances within electronics and instrumental manipulation. (I’d reference a single track, but there are so many when they do this.)

The album, as a statement, was deeply surprising for Radiohead. It’s not that Radiohead hadn’t made good music before — I have a couple friends who insist that The Bends was the best alt-rock record of the 90s. It’s that they never made a record that felt so important, or so consistently impressive. They had also never made anything so daring.

Consider Exit Music (For a Film): the backing track initially appears to be solely a guitar, and eventually is filled in with a choir. This hadn’t been done before. Muse wasn’t around in 1997 (and frankly, Muse is garbage next to Radiohead and has never compared). Exit Music (For a Film) stands on its own, and on lesser records, would be considered a standout track.

Karma Police was the last time that Radiohead would write a “typical” radio-friendly song. Electioneering was some of the last “typical” stadium rock they ever made. But both songs, despite their genre trappings, feel like the band is thinking completely out of the box.

By the time the album is over with The Tourist (which has a number of small flourishes that call back to earlier songs on the record, if you’re looking for them), it feels like you’ve been on a journey that went well outside comfortable rock music. It feels like an opera that you went on with a rock band uncomfortable with being called a “rock band.”

At the end of the day, OK Computer is a record that feels inspired by Miles Davis and Pink Floyd, as well as many of the techno bands of the day. It inspired everybody. It was a revolution because rock music was supposed to be rebellious, but Radiohead saw that it was becoming trite and rebelled against it to do something new.

For a lot of people, myself included, that all adds up to a lot of magic. Some critics think OK Computer is the best record of all time. Many think it’s as important as Sgt. Pepper’s Lonely Hearts Club Band. The easiest statement to make is that it is both over-rated and misunderstood, beautiful and farcical, inventive and ceaselessly borrowed from. At this point, there’s little doubt Radiohead’s OK Computer was the most important — and best — record of 1997, and perhaps the defining album of the late 1990s. It’s a guitar record that sounds like an electronica record, and honestly, I’m not sure it gets any cooler than that.