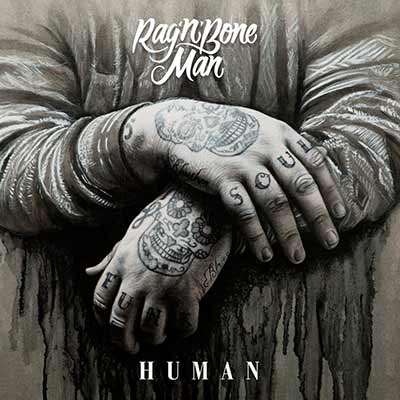 Rory Graham’s first feature-length album strips back some of the rock influence and gives him room to breathe as the tremendous singer and performer he is.

It took me a couple listens to wrap my head around Rag’N’Bone Man’s full-length debut. I was a fan of his earlier work, which had a distinctly heavier rock sound. In fact, I did a bit of a double take and listened to his early EPs again — just to make sure I hadn’t mixed him up with someone else.

Human is such a different album that Rag’N’Bone Man almost needs a new name. (His earlier work, particularly Disfigured, suited it much better).

But all that withstanding, this new style suits Rory Graham so much better that it’s hard to complain. From the opening (titular) track, Graham totally dominates Human. In fact, his old style was so dominating musically that I had no idea Graham was this good of a singer!

Nearly every track is worth writing about. The afore-mentioned title track is a stunning opener that capitalizes on everything that Human is about: swaggering bass lines, blues influence, and a huge pop sheen overtop of everything. “Bitter End” is a track that simmers thanks to an incredible performance from Graham. “Be the Man” is incredibly pop-heavy, but Graham’s baritone voice carries it through the entire song.

There are some songs that are particularly strong. “Love You Any Less” is a song that will no doubt capture the radio the same way Sam Smith does. It’s an incredible, raw performance from Graham overtop of a remarkably bare backing track that lets his voice breathe.

“Die Easy” is an a cappella performance that simply captivates. There’s nobody with a voice like Graham’s on the market.

Even his older tracks, like “Wolves”, are given a bit of a sheen make-over here that put an extra focus on Graham’s voice. But “Wolves” doesn’t sit as well with this new, cotton candy style that Graham’s performing as now.

And the occasional track features a hip hop performance, which is something that Graham was doing in 2014 too (with a Vince Staples nod then). But these days, it doesn’t sit as well.

When the old Rag’n’Bone Man collides with the new one, there’s a slight disconnect.

But despite that, the debut record from one of the most intimidating voices in neo-blues is an astounding effort, and one that I’ve been listening to again and again over the past week. It’s easy to get into, and it sticks in your head. Rag’n’Bone Man is one of the most promising new performers of the past five years.