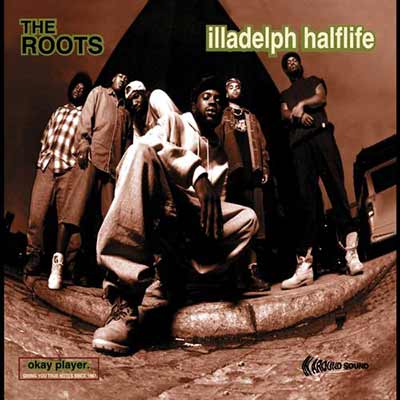 Illadelph Halflife is the moment when The Roots became a self-aware, genre-bouncing hip hop group that wasn’t interested in conventional hood politics.

Long before they were the house band for Jimmy Fallon (on both Late Night and The Tonight Show), The Roots were one of the most important seminal hip hop groups around. (They still are.) Their records had a huge influence on the best rappers today, and can be felt in even today’s most prodigious stars — people like Kendrick Lamar.

Illadelph Halflife is often labelled R&B, which is strange: it’s as R&B a record as To Pimp a Butterfly is a jazz record. While it features prominent R&B musicians, and a lot of jazz players too, Illadelph has more stone-cold rap on it than most rappers dare play with today. Although the rap group experiments with all sorts of other genres, they remain consistently interested in hip hop as a craft.

The Roots also never shone brighter as a conscious hip hop group, with songs that rebel against stereotypical gangster ways and encourage responsibility. Instead of focusing on the braggadocio or their street cred, The Roots make a name for themselves on Illadelph Halife by separating their behaviour from that of their peers. It all amounted for a watershed moment in 1990s hip hop, particularly in an era where it felt like every week a new gangsta rap record was dropping.

Historically, Illadelph Halflife was The Roots’ breakthrough record that got them the claim to fame they were looking for. Today, it sounds a little rough aroung the edges — but that’s just the dated production values. Give this a whirl and it’s old-school vibes will have you bobbing your head like it’s the 1990s all over again.