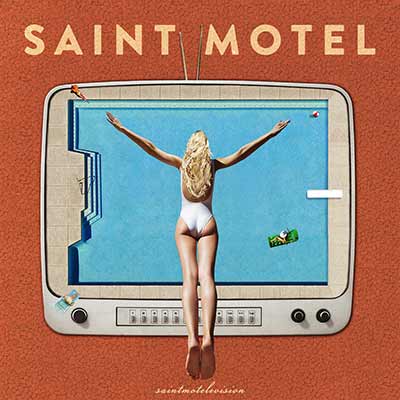 In the realm of catchy and hummable music, you’d be hard-pressed to find anything more relevant and exciting than saintmotelevision, the second feature-length record from Saint Motel.

Sometimes, you just need to listen to something a little silly. Your party music, running music, or gym soundtrack. saintmotelevision, the second record from Saint Motel, is gunning for that spot in your music library.

And it’s going to be hard not to give it to them.

It’s obvious from “Move”, the album’s first track. Saint Motel is interested in writing pick-me-up music that grabs your attention and keeps it. The catchy chorus, the hook-filled verse, and even the production on the record are all punchy.

Almost every track has the same level of catchiness and enthusiasm. I love the sax flairs in “Destroyer”. (And the lyrics are hilarious: “I don’t break hearts; I destroy them.” I flat-out giggled when I heard it the first time.) “Getaway” sounds like the sort of tune people would have danced to the old iPod commercials (and I’m looking forward to seeing the music video, which I hope times the cuts to the beat).

It’s not just the opening tracks that are catchy, either. Even the later tracks on the record, like “Local Long Distance Relationship (LA2NY)”, are inescapably catchy. Almost every song is danceable, and nearly every song will compel you to roll down the window and sing along. (My mark of a great sing-along record is one that I want to belt along with in the car.)

But the inarguable highlight of the record is “For Elise”, a Queen-like track that riffs off “Für Elise”. It’s everything that Saint Motel does well: it’s catchy, naturally, but it’s also lyrically clever. And the way it combines modern pop with Beethoven’s piano composition is very smart songwriting. It’s hard to discuss the track without superlatives, because it’s a flawless pop song.

With that in mind, there’s only one thing that saddens me about saintmotelevision. Not every track is as good as “For Elise” (although that might have been an impossible ask). That’s literally my only complaint about the whole record.

For fans of Jukebox the Ghost (and a few of the other indie pop darlings of the past decade), it’s impossible not to recommend saintmotelevision. It’s easy to put saintmotelevison on repeat and never turn off — which makes it, in my books, a stupendous indie pop record.