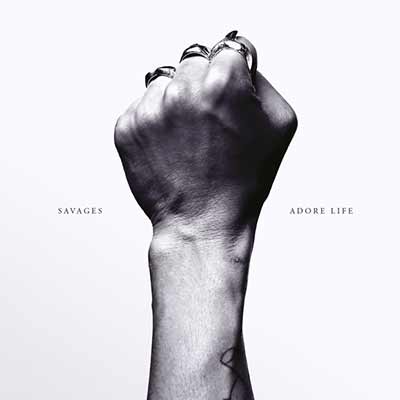 Adore Life doesn’t try to outdo Savages’ first record, but instead dares to experiment. The band uses the album not to get louder, but to get more intimate, making a fearless record that defies all our expectations.

Adore Life is an astonishing second record from Savages that finds the band comfortable in their post-punk trappings, perhaps to the point of being too comfortable in many ways.

That’s not a complaint: the record excels because Savages aren’t screaming at you from a distance. They’re intimate, asking questions — the same questions that punk has asked since the beginning — but doing it in a way that makes it feel like the band is two feet away.

I read one review of the album shortly after its release that said the album feels like a songwriting rut for the band. I find that perspective very interesting: I understand what the author means, but as somebody who’s played in a number of groups, this sounds exactly like what a band would put out if they were comfortable.

These songs weren’t meant for a stage, necessarily. They were made for the basement. When friends are over and they want to hear what you’re working on, but you don’t have the space to get right in their face about it, you’d play something like this. It’s still got a bite, but its instrumentation is quieter.

While most punk (and perhaps even most post-punk) sounds like an angry, barking dog, Adore Life sounds like a long and bitter stiff drink. It’s a step forward for the band musically and sonically, and it’s also a tremendous sophomore effort that surprises fans and breaks the mould of what we often expect from the genre.