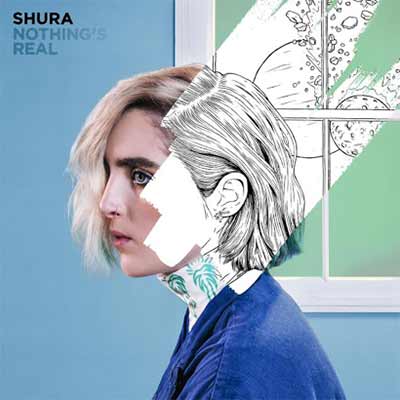 On her debut album, Shura is releasing the sort of confident pop music the world needs more of. With the trappings of a big-budget pop record and the soul of a singer/songwriter album, Nothing’s Real is a statement.

On Nothing’s Real, Shura has a lot to say. The album is unusually long for a pop record: fifty-nine minutes and thirteen tracks. It culminates in “The Space Tapes,” a track that samples Robert Durst’s voice at the climactic ending of HBO’s The Jinx: “I killed them all, of course.”

Hearing the admission was unsettling for those of us who kept up with the show (or the criminal case), but hearing it on a pop record feels all the more disturbing.

That’s not to say that Shura’s music is disturbing. Most of it feels like it straddles the line between modern pop and throwback electronica-influenced work. Take “Nothing’s Real,” which is the first “real” track on the record after the introduction. With a bass line that feels like it’s walking, the chorus feels influenced by the 1980s — Jackson in particular. But the chorus, and Shura’s vocal approach, is thoroughly locked into the 21st century. The bass line is overwhelmed by synth, and Shura’s vocal work builds into an emphatic, almost shouted final line.

Her vocal performance betrays the fact, though, that this album would have fit right in amongst the women making music in the ’80s. Even tracks like Touch fit right in to that decade. The album imbibes vibes from that era without ever sounding anything less than modern and twenty-first century, which is a feat in and of itself, but perhaps more impressive is Shura.

For a debut album, Shura sounds remarkably self-assured — even if she doesn’t trust herself or her emotions anymore, as the title of the record (and the content of the songs) suggests. For her, the record is her way of announcing liberation from her emotions during a particularly difficult time in the hospital. She’s a free woman, one bound to struggle with the difficulties of liberation — as she openly does throughout the record — but one who’s striving to become fully self-aware. “2Shy” is the embodiment of the entire record, the moment where it comes together thematically.

Within that framework, Nothing’s Real is the definition of what a good debut should be: Shura is sure of what she is, but grappling with the details. As her skills become more honed, I look forward to even more records in the future.