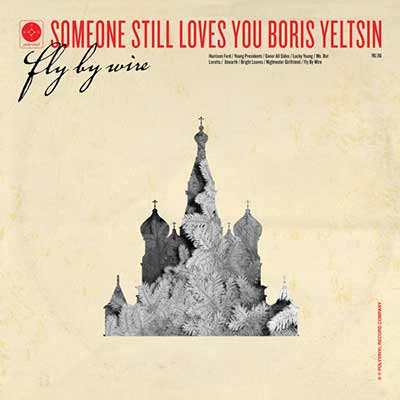 Someone Still Loves You Boris Yeltsin

Fly By Wire doesn’t break new ground for the band, but it’s a reminder that Someone Still Loves You Boris Yeltsin captures our attention in the same way indie darlings Tokyo Police Club can: with pure charm.

Ridiculous band names aside, SSLYBY puts out fine records, and Fly By Wire is no exception. Harrison Ford is a great way to open the album. It’s revealing of what SSLYBY were going for with Fly By Wire: this is not a record filled with experimentation. Rather, it’s a way for the band to pull back and simplify. If you’re not prepared for it, Fly By Wire can be unappealing: it’s an indie pop record from a band known to experiment, but here they’d rather charm us than blow our minds.

Bright Leaves is raw enough to sound different from the usual indie pop love note. Young Presidents is as energetic as the record gets, but despite its upbeat drum patterns and pop-laden hooks, it never abandons the insistently smooth vocals of Philip Dickey.

While Fly By Wire isn’t reinventing the wheel with tracks like Loretta and Cover All Sides (which is very much like The Beatles), the record is eminently listenable from front to back and distinctively catchier than some of their peers. Even when Someone Still Loves You Boris Yeltsin aren’t trying to outdo everybody around them, they’re recording more appetizing records.