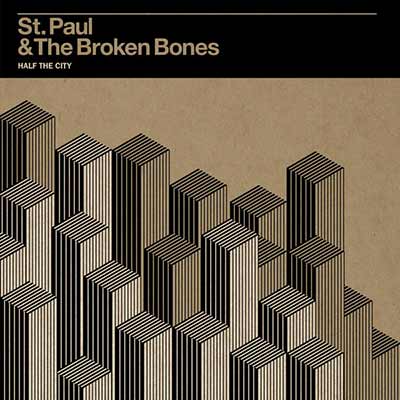 St. Paul & the Broken Bones feel like a success story waiting to happen: Half the City is a stupendous debut from a soul band who are dying to blow your mind in concert, and trying to mimic that experience on record.

Along that same blues and jazz line as Miles Davis, St. Paul & the Broken Bones released their first LP, Half the City, last month. (It’s not on Youtube much yet, but their live performances are, and they’re incredible.) It’s a great piece of work that reminds me a little bit of 2012’s hit release from Alabama Shakes.

St. Paul & the Broken Bones are a six-piece soul band from Alabama. And ironically, Half the City was produced by Alabama Shakes member Ben Tanner. The deep south influence, as well as Tanner’s keen production sense, is really evident throughout the record: there’s a sense of raw vitality to the record that isn’t always evident in modern soul.

It’s also clearly a live band’s record: the album was recorded while the band is on national and international tours, and you can practically feel the sweat dripping off of them due to the lights. It adds to the record’s youthful vigour.

The first track, I’m Torn Up, is really one of those openers that needs to be heard to be understood. These guys are the real deal. The James Brown evidence is evident, and I love the horns section. While these guys rock on tracks like Half the City, they’re at their best on tracks like Don’t Mean a Thing, and Call Me. And listen to that singer! While he’s great on rockers like Sugar Dyed (actually phenomenal), listen to him belt it at a live show! Bands like this only come from Alabama. Stupendous stuff.