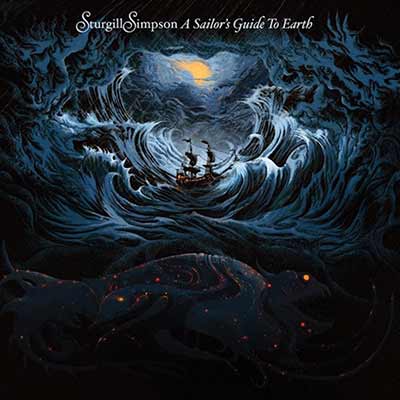 A Sailor's Guide to Earth

When was the last time you heard a country star cover a Nirvana song? A Sailor’s Guide to Earth is not a traditional country record. It’s even unfair to call it an alt-country record. Sturgill Simpson is country music’s bravest explorer.

A Sailor’s Guide to Earth is unusual. It’s so far from being conventionally country that it’d be easy to write the entire album off as a Sufjan Stevens-inspired experiment, but Simpson’s awareness of his genre’s roots (Breakers Roar and the first half of Welcome to Earth (Pollywog) reinforce his street cred amongst country’s stalwarts.

The album’s standout tracks are completely unafraid of unconventionality. The previously mentioned Welcome to Earth becomes a celebration by the time it’s over. Keep It Between the Lines feels as country as it does soul. By the time you get to In Bloom, Sturgill’s (excellent) Nirvana cover, you’re struck by its traditional country flavour. Ironically, it’s one of the most straight-forward country tracks on the record — even when it gets louder towards its ending.

A Sailor’s Guide to Earth isn’t just unusual musically, although you’d be forgiven for not noticing the subtleties on your first couple listens. Simpson’s lyrics are uncompromisingly optimistic, likely because of the album’s theme: A Sailor’s Guide to Earth is a love letter and note to his newborn son. It’s clear that Simpson is full of hope and optimism for his son, and for the future generations.

There are no mopey tracks, and few moments that dabble in pessimism. Even In Bloom feels positive (largely thanks to its near-lullaby like state).

If anything truly stands out though, it’s Sturgill’s songwriting quality. He’s become a country superstar, one with an uncompromising creative vision. A Sailor’s Guide to Earth is his most accomplished record yet, and it feels as transcendent and intimate as Father John Misty’s I Love You, Honeybear did last year. For the first time in several years, we may have a serious country contender for album of the year.