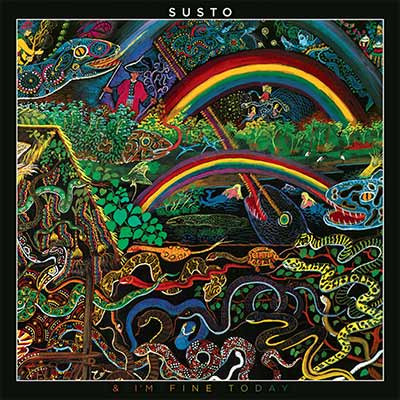 SUSTO’s sophomore record is recklessly ambitious, but the band executes on their vision so well that the album’s comparable to The War on Drugs’ or Sturgill Simpson’s best efforts.

SUSTO, who named themselves after a chronic cultural illness among Latin American cultures, sit comfortably beside country-influenced rock groups like The War on Drugs, and rock-influenced country stars like Sturgill Simpson. But SUSTO’s voice is a refreshing addition to those crossover genres. They boldly blend rock and alt-country with splashes of orchestral ambition, and their lyrics deal with everything from homosexuality and drugs to reconciling the faith lead singer Justin Osborne gave up years ago.

The music is ambitious and boundless, and & I’m Fine Today is SUSTO’s best crack at it yet. You can see the growth in album art alone: while their 2014 self-titled debut’s album art took a crack at Nirvana’s Nevermind, & I’m Fine Today embodies the psychedelic style of the 60s with album art that begs to be owned on vinyl.

& I’m Fine Today is a collection of fine songs, but it’s also a collection of fine stories. Many songs on the record stand out for their songwriting finesse, but almost every one is memorable because of the story they tell. “Gay in the South” tells an obvious story, but it’s one that encapsulates the record: one where Jesus isn’t the centre of somebody’s being, but rather somebody that haunts them.

“They promised us: ’You are going straight to tell when you die.’ I don’t even think it’s a real place,” Osborne sings on “Gay in the South”. On “Waves”, he asks: “Is there anybody in there, smoking weed with God?” On & I’m Fine Today, the questions Osborne asks aren’t strictly personal anymore. Now, SUSTO is asking the questions of their generation about the reality of a higher power — and whether or not that higher power is a benevolent force if its believers are not.

On the other hand, if philosophical questions about God isn’t your style, this is an album with a song called “Cosmic Cowboy” on it. So despite the life questions, there’s still space for some fun and games.

If the album has any central messaging, it’s earliest mention is in “Waves”. “The sun comes up, the sun goes down, and that’s what it’s all about,” Osborne sings in the chorus. And on “Jah Werx”, the final track, the band sings “Jah werx, and I’m fine today” throughout the chorus. When the lyrics come together, & I’m Fine Today is about God, nature, the rising and falling tides of waves as the sun rises and sets, and the way everything returns to dust when it’s over no matter what you believe.

Musically, & I’m Fine Today is a wonder. From the far-out style of “Far Out Feeling” (no pun intended) to the layered production of “Wasted Mind”, the songwriting and engineering are impeccable. But even more impressive is the storytelling of the record. & I’m Fine Today is a captivating, exhilarating record, and an astounding sophomore attempt from SUSTO that catapults them to the top of the league.