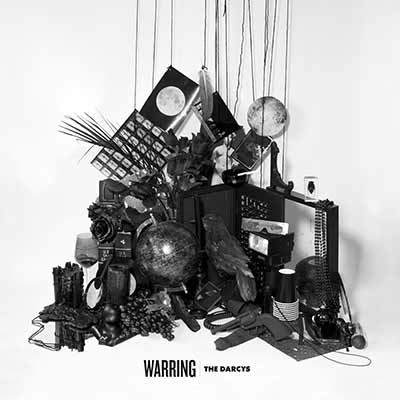 Warring is impressively lyrical, almost literary, in its approach to rock music, but the two-piece art rock band continues their musical experimentation with their third album.

The Darcys, who hail from the frosty netherlands of Toronto, describe themselves as an art rock band. That’s a lot easier of a description than any I can come up with, so we’re going to go with it. (Before I forget, they’ve got a really cool website.) The album opener, Close To Me, is a great introduction to what these guys are about. It’s electronic and sprawling, and artistic without being in your face. Shortly after the two minute mark, when all hell breaks loose, the band never loses control. It’s great. Hunting is going to make a great single (if it’s not a single already), and Itchy Blood reminds me a little bit of Radiohead. Honestly, the band is taking a lot of influence from Radiohead — no complaints there.

The River and Lost Dogfights are also great songs, with Lost Dogfights being particularly beautiful. There’s a choir in the background and a piano that has the same sort of bounce-y vibe Trent Reznor would record for a film soundtrack (actually, it reminds me a lot of piano lines from The Social Network Soundtrack). Despite taking influence from so many different places, one thing The Darcys isn’t short on is identity — and that’s a great thing. Rdio has an exclusive bonus track (they also had an early release), at least in Canada, called Ultra Violet. That track, along with the rest of the album, is worth a listen if you can find it (it’s not available on Youtube). Great stuff.