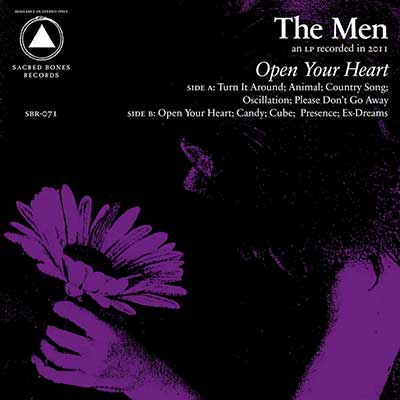 With Open Your Heart, The Men open their hearts and start drifting away from their punk roots to embrace country, surf, and shoe-gazing influences. When they rock out, it's their best record, and although they lack some polish when they start wandering down different paths, it still sounds uniquely like The Men.

I had to double check when I heard the opening track to Open Your Heart to see if The Men’s records were in any way affiliated with or produced by Dave Grohl, because they sound that similar when they come rolling out of the gate. When these guys put their balls to the wall, they sound amazing, and there’s no doubting who their greatest influences are.

That being said, when they take their feet off the gas and slow down a little bit, they don’t have the same Tom Petty influence that the Foo do. Whether or not that’s a good thing will depend on how much you like the quieter Foo songs. I like The Men more when they’re rocking out, but their quiet songs aren’t bad — they’re just not as memorable or high quality.

Ultimately, what makes the record so interesting is that’s a band trying something new. It’s rare to capture the moments of musical birth on tape, and thanks to their background in fuzzy rock music production, something about their experimentation sounds incredibly organic.

But that all being said, their music is incredibly good when they turn up the distortion. And I absolutely love the simple album art, which is somehow riveting. I can’t figure out why I like it so much. Maybe it’s the colours.