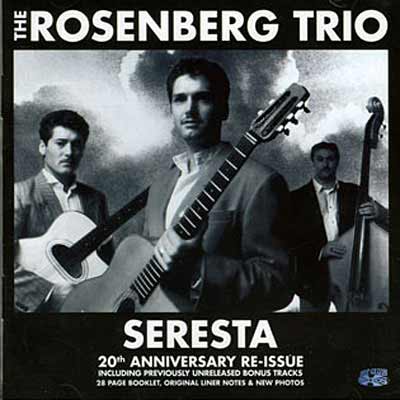 The Rosenberg Trio's first album has aged very well, despite its obvious influences. Jazz music like this is hard to find, and The Rosenberg Trio's adept at adapting the gypsy jazz style for a modern age. Seresta reveals the trio at their youngest and hungriest.

The Rosenberg Trio are quite clearly heavily influenced by their late peer in gypsy jazz, Django Reinhardt. His influence is inescapable, from the opening notes to the final solos of every bar, song, and album of their discography. (They even recorded a tribute to him in 2010.)

Seresta is their first album, released in 1989. Frankly, it’s not popular enough to have its own Wikipedia page, so there’s not a lot I know about its historical context. What I do know is that the remaster sounds really good, and that the band never really (in my estimation) sounded better than this.

Despite all of their efforts to sound like their hero, it’s tough to sound like anything else in this admittedly somewhat-narrow genre of music. Jazz can go anywhere, but Django made gypsy jazz his own and he made it in his image. Re-inventing that wheel is probably darn near impossible.

So I should be careful to say that I’m not complaining when I say that the Rosenberg Trio sound a lot like their inspiration. Their music is beautiful. It’s the sort of music Woody Allen would use for his European movies. It’s the sort you use to set the mood for a romantic dinner. It’s gorgeous, textural, and it’s aged very, very well.