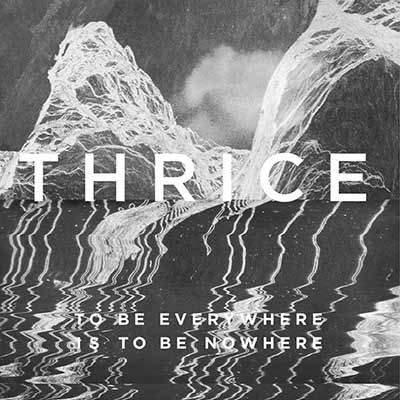 To Be Everywhere Is to Be Nowhere

Thrice’s comeback album is as good as anything they’ve made in the past, and spends much of its time hearkening back to their older tracks and style.

It felt like Thrice needed to take a hiatus after their last couple records, which felt disappointing and tired. The band’s ceaseless inventiveness, to the point of re-inventing their post-hardcore sound on every record, felt like it had leaded to a burnout.

But still, at their best, Thrice was a band that you turned up louder than everybody else when they came up on shuffle in the car. They were the post-hardcore band whose lyrics you could gobble up in the liner notes (back when liner notes were still a thing). They had depth, musical integrity, and a seemingly endless ability to churn out monstrous riffs and beautifully sad slow tracks side by side, or often as contrasting moments in the same song.

Years later — it feels like forever — Thrice are finally back with To Be Everywhere Is to Be Nowhere, an album that won’t count as their best, but feels like one of their biggest. Loud anthems rage throughout the record. Hurricane has riffs that are simply gigantic in scope. Blood on the Sand feels like it’s been lifted from The Artist in the Ambulance. The Window, a particular favourite of mine, has all the dissonance and power of the band’s most inventive records.

Almost every track on this record is a complete rager: Black Honey captures the band at their most radio-friendly and anthemic. Whistleblower is as politically aware as always (although perhaps a little less cryptic than some of the band’s lyrics have been previously).

If the album has any weak points, it’s that Thrice seems overly eager to make a point that they’re returning “to their roots,” despite focusing rather heavily on anthemic tracks. Death From Above and Stay with Me’s verses feel like quiet respites from the rest of the record — not because they show the band at their best (they certainly don’t), but because they give the listener a bit of a break.

Death From Above particularly benefits from this, because the quiet moments make the track’s pummelling chorus all the better. It becomes one of the better songs on the record, even though the verse is trite. (On the other hand, Stay with Me is a sour track, one that’s commercial to the point of degrading the band’s talent.)

The album closes out on a quieter, more somber note — in typical Thrice style, gratefully. Salt and Shadow is an excellent finisher, a song that captures everything I loved about Thrice’s quieter side years ago. It’s a tease, of course, because I wish there was more like this, but maybe that will come on the next record.

For now, it seems the message is simple: Thrice is back. They know who they are and what they stand for. And while they may be experimenting less than ever, they want us to know they refuse to “phone in” the record. To Be Everywhere is to Be Nowhere isn’t as good as Vheissu or The Alchemy Index, but I’d happily take it over much of the rest of their catalogue. It’s a welcome comeback.