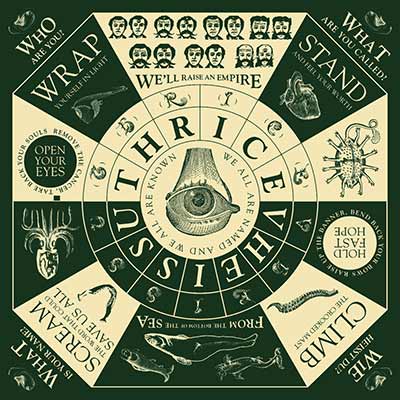 It's hard to say whether it was accidentally or not, but with Vheissu, Thrice recorded what is — in my mind — one of the best post-hardcore records ever made. Ten years later, it still holds up and remains impeccably strong thanks to its incredible and fearless songwriting.

In the past week or two, something incredible happened: the best post-punk record ever made, Thrice’s Vheissu, turned ten years old.

If you haven’t heard it, Vheissu feels like the sort of record that comes along only once or two every genre. It’s post-punk’s Master of Puppets or Thriller, a set of tracks so monumental that it’s hard to ignore them.

Thrice basically used the record to experiment: from even the first track, you know this is going to be an unusual record. And when it’s a post punk track with a beautiful piano leading the way, or a music box taking charge, it feels entirely like a legitimate idea. There’s no sign of emo anywhere (thank God), and it’s clear that the band hasn’t lost their edge.

While there often are moments of screaming rage or intensity, Thrice benefits from introspection here. And somewhere in there, they put out a record about sacrifice and friendship that few bands have managed to beat. If you’re into punk, hardcore punk, post-punk, hard rock, or post-hardcore (which this record is usually described as, but I don’t like genres to be so specific), this record needs to be in your collection.