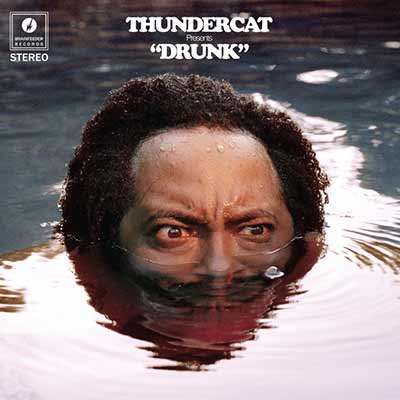 Drunk is a typically ambitious R&B record from Thundercat that also embodies jazz, but it’s also the most approachable record this visionary has released in years.

Thundercat is, without a doubt, one of music’s quirkiest oddballs. Equal parts Flying Lotus and Kendrick Lamar, the man embodies futuristic jazz. His music is confounding without becoming irritating, thanks to the way he seamlessly blends contemporary song structures and bold experiments.

With Drunk, Thundercat gets a little more real even as his music gets a bit more cerebral. True to the album’s name, the music is self-deprecating, anxious, spaced out, and hilarious — often during the same song.

“A Fan’s Mail” sees Thundercat dreaming about turning into a cat (and literally meowing about it). “Uh Uh” has some unreal bass lines that feel like the product of Nintendo and cosmic drugs. “Walk On By”, which features Kendrick Lamar, sounds like it belongs on To Pimp a Butterfly. But “Show You the Way”, the preceding track, is a soft rock track that features both Michael McDonald and Kenny Loggins.

Despite their myriad of differences, these songs are united by their common love of jazz and jazzy experimentation. Make no mistake, even when he’s experimenting with synths and pop beats on album standout “Friend Zone”, Thundercat is channeling his favourite jazz icons.

All of this makes Thundercat’s latest record as hard to classify as always. But one thing is certain: Drunk is certainly more upbeat than Thundercat’s last record, The Beyond / Where Giants Roam. While They Beyond dealt with death and transcendence, and what happens in “the beyond” after our lives are over, Drunk seems to embrace our morbidity in life and celebrate it (with a healthy dose of partying and drinking). Hence the title.

In a lot of ways, Drunk feels like a reaction to 2016. The songs aren’t all politically charged, but there are many that deal with being black. Thundercat’s take on this is racially charged, of course, but also lyrically ironic (which isn’t surprising). But on the flip side of that, Thundercat’s leaving his wallet at the club and getting drunk and friend zoned as he tries to sort out the mess that is life.

It all feels like a poor way or dealing with stress — which maybe we can all relate to, at least a little bit.

In it all of its idiosyncrasies, Drunk feels like Thundercat being his most relatable — even if it is drowning in experimentation. It’s a can’t-miss record that celebrates life and runs away from it, often in the same breath.