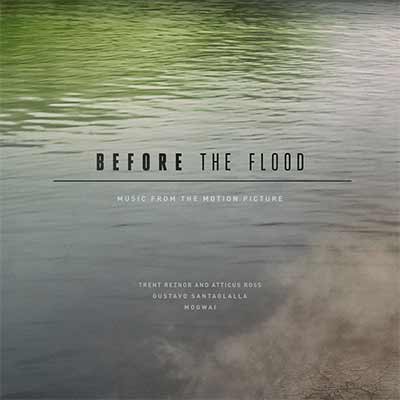 This new soundtrack from Trent Reznor and Atticus Ross is their first to feature outside collaboration. Mogwai and the composer of Brokeback Mountain both lend their styles to these compositions of hope and unease.

I love the soundtracks Trent Reznor and Atticus Ross make together. Beginning with The Social Network, the pair have specialized in making aesthetically beautiful and sonically relevant music. You don’t need to see the associated film to love the music, either. Trent and Atticus are some of the only composers working today whose music stands on its own.

For Before the Flood, a new documentary about global warming from Leonardo DiCaprio, Trent and Atticus have expanded their traditional boundaries. Before the Flood is the first time they’ve worked with “outsiders” on music, bringing in Mogwai and Gustavo Santaolalla (the composer behind Brokeback Mountain).

This lends an additional touch to the compositions. Gustavo’s horn work and textural abilities are a good match for the aesthetic qualities of Reznor and Ross. Mogwai’s tracks feel as if they come from an entirely different perspective, but rather than clashing with the other compositions, they add a variety that otherwise wouldn’t exist.

What’s most interesting about Mogwai’s tracks is how optimistic they sound, by comparison. Reznor and Ross are known for making uneasy music — or music that starts laid back and quickly decomposes — but Mogwai has a whole different feel. Check out “Ghost Nets”, a Mogwai track that’s bookended by the Reznor and Ross’s more “traditional” “And When the Sky Was Opened” and “Trembling”. “Ghost Nets” is an entirely different track, without the same elements of unease that riddle the others.

This is the variety that makes the record work as a whole. Unlike Trent and Atticus’s soundtrack for Gone Girl, which was both beautiful and exhausting, Before the Flood is easy to absorb as a whole. I firmly believe this is because of Mogwai’s contributions — the unsung heroes of the record.

You don’t need to watch Before the Flood to enjoy the music on stage here. In fact, I didn’t (and haven’t). I’m not even sure the documentary has premiered yet (I think it’s a television premiere to boot, and we don’t have cable). But even without seeing it, the level of sobriety on hand here — the hope for our planet’s future and the fear of its potential destruction — is plainly evident.

This is, in my opinion, the best work that Trent Reznor and Atticus Ross have done together since The Social Network. It’s already become a staple in my ambient music collection.