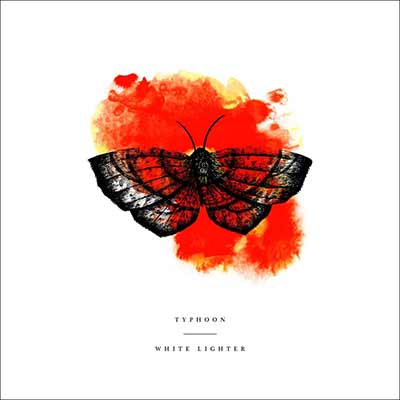 Typhoon’s White Lighter sounds different from much of the rest of the indie rock crowd — their complicated arrangements and orchestrated approach separates them from the rest of the pack.

I like vintage Modest Mouse more than their new records, and Typhoon seems to capture and develop that sound without going down the same weary roads Modest Mouse has travelled. White Lighter is a tremendous record in every way. It’s catchy and big enough to work at a stadium, but intimate enough that it could easily work in a smaller venue. And it’s exploding.

When I was listening to the record, it gained thousands of plays on Rdio in a matter of three days. By the time you read this, I wonder how many plays it will have had. The album kicks off with Artificial Light, which certainly isn’t a bad introduction, but you’ll want to skip ahead to Young Fathers if you want to see the bravado these guys are really capable of. Unlike Modest Mouse, Typhoon can really break out the acoustics and work some magic there too. Listen to The Lake. My favourite comment about the song was “It’s good. It’s really good.” Yes. Yes, it is. Dreams of Cannibalism, the lead single, is simply fantastic, both ska and folk-influenced. Hunger and Thirst is just ridiculously good. Common Sentiments makes me want to jump around dance with a broom, but it also captivates me. And Post Script is six minutes of beautiful sadness.

White Lighter is going to go down as one of the best records of 2013. This 11-member band is going to be alternative indie’s new darling, right up there with last year’s big hits, The Lumineers. With their complicated musicianship and intricate arrangements, their live performances often require more than a dozen musicians — and that level of detail isn’t very different from Arcade Fire or Frightened Rabbit. White Lighter makes Typhoon a trail-blazer, and I’m excited about where they’ll go next.