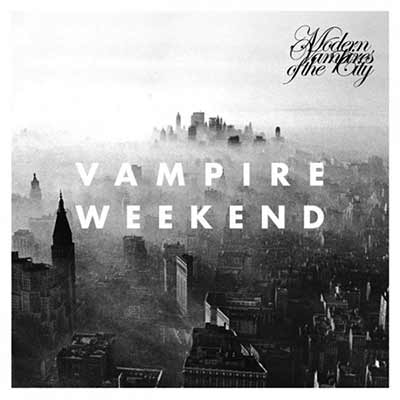 Modern Vampires of the City

In a year loaded with fantastic music, Vampire Weekend’s record stands close to the top of the heap. If you’ve never heard these guys before, there really isn’t an easy way to describe what they sound like. I like to use the word “joyous,” but I think that undersells them.

One of my favourite blogs, Henry’s Music Blog, calls Modern Vampires of the City “the best album I’ve heard all year”, and goes so far as to call it the second-best of the past decade. I don’t know if I’ve earned the right to say anything that wild, but this record is absurdly good. Who knows, maybe Henry’s right. Years from now, we could look back on Modern Vampires of the City as one of the decade’s best releases.

Check out the lead single, Diane Young (which is also a hysterical video). If that’s not enough to convince you to buy this record right now, give Step and Ya Hey a whirl. (And if you’ve never heard of them, check out their first two records, the self-titled Vampire Weekend and Contra.)