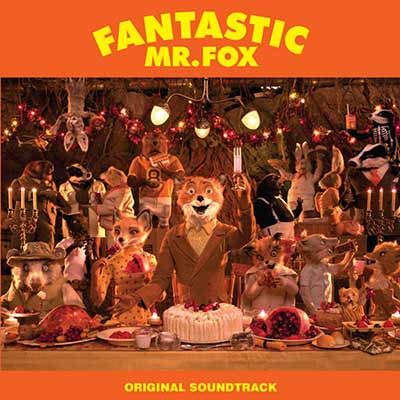 As quirky as the film with its own self-contained sense of humour, it’s difficult to dislike Fantastic Mr. Fox’s soundtrack.

Those of you who have seen Fantastic Mr. Fox know it’s a hilarious and heartfelt film from the sublimely quirky Wes Anderson, and this soundtrack is the perfect complement. Perhaps non-traditionally, it mixes the film’s original score with a bevy of tracks that inspired the film (but not tracks that were inspired by it, which is a clear difference). It’s revealing of Anderson’s creative process, but also a wonderful ode to his influences as a director.

It’s hard to be in a bad mood when you listen to this soundtrack.Alexandre Desplat’s original score is excellent, as always, (he’s also behind the beautiful Curious Case of Benjamin Button soundtrack, which is one of the best parts of that film), but it’s also got a smattering of classic tracks from groups like The Wellingtons and The Beach Boys.

Anderson has a good ear and he goes for deep cuts. For example, one of the album’s last tracks is Ol’ Man River (by The Beach Boys) — certainly not a well-known piece, but most definitely a beautiful one. The album also sheds a little bit of light on the idea that every band from that period sounded like The Beach Boys or The Beatles — look no further than Let Her Dance, by Bobby Fuller Four, for that.

Fantastic Mr. Fox collects beautiful classical, blues, and jazz touches too — Art Tatum’s Night and Day makes a surprise appearance. And, of course, you can never go wrong with Street Fighting Man by The Rolling Stones. Looking for a pick-me-upper for your Monday blues? The Fantastic Mr. Fox Soundtrack is a great place to start.