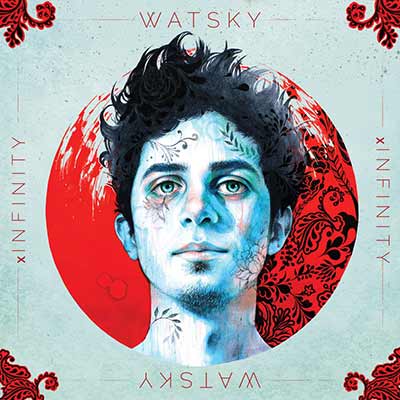 Watsky’s abilities as a rapper approach mastery on x Infinity. Calling him a rapper is almost an insult; on his fourth record, Watsky is a vocal and lyrical technician.

Watsky is the first rapper I’ve heard in my life that I’d bet on in a rap battle against Eminem. x Infinity, his fourth album, is an incredible virtuosic treat of a hip hop record. And while the comparison to Eminem is inevitable based on speed and style, Watsky’s raps aim for an intellectual level far above Em’s potty mouth.

If you don’t know Watsky, you might remember seeing him perform in season six of HBO’s Russell Simmons Presents Def Poetry for his slam poetry. He also became popular for a YouTube video in 2010 called “Pale kid raps fast” (which is no longer available), which got him the attention of Verizon, who asked him to appear in a commercial to promote a new product with a speed rap. Not only did Watsky decline, he felt it was such an insult to his artistic integrity that he made another video making fun of Verizon.

That attitude — an attitude of passion and artistry — seeps into his hip hop. x Infinity finds Watsky calling us to be more real with each other.

That attitude is evident in hard-hitting tracks like the anti-Trump (and anti-Clinton) “Pink Lemonade”, or the emotionally involving “Stick to Your Guns” — a protest song about gun violence, news networks, and politics. “Hit me with your truth,” Watsky raps, almost pleadingly, on the song. It’s an observation of the lack of honesty from reporters and politicians, but it’s also a cry asking us to get better at this.

If you want to hear his speed rapping, Watsky unleashes it on the virtuosic “Don’t Be Nice”, which he uses to joke about hot moms and seriously tell people that he doesn’t have time for “fake friends”.

Throughout x Infinity, which features as many bangers as it does pop-infused moments of quiet beauty, Watsky continues to plead with us to be more honest and vulnerable with each other. He leads by example on songs liked “Talking to Myself”, when he opens up about his personal struggles.

It can be hard to hear his messages through his rapping, though: Watsky’s ability is second-to-none, and five albums in, he’s only getting better. Without a doubt, he’s one of the most skilled rappers in the world right now. His thoughtful lyrics are almost a bonus.

Whether he’s speed rapping or cleverly finding ways to adjust his intonation to match the instrumentation surrounding him, every track has moments that are worth discussing. On the previously mentioned “Don’t Be Nice”, he plays with his sample and raps against it, creating lines and verses off the sampled words “Don’t” and “Don’t Be” in an astonishing display of prowess and technical mastery.

x Infinity is the album that could elevate Watsky to household name. But he’s already got the attention of hip hop fans everywhere. With x Infinity, he continues perfecting his craft.