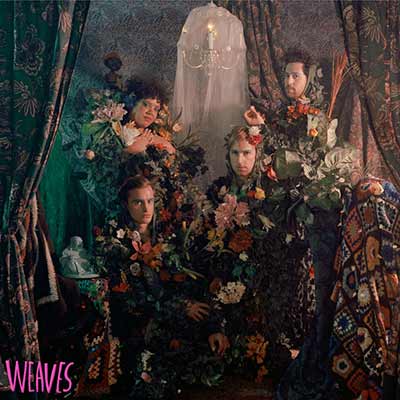 The debut album from Weaves is a delightful riff on bands like Pixies and Velvet Underground, and certainly one of the best debut albums of the year. Punk-y alt-rock hasn’t sounded this good since Nirvana.

Punk rock doesn’t have to make sense on first listen — and some of it might never make sense. So when Weaves sings “I want two oceans” throughout the chorus of Two Oceans, making sense isn’t a prerequisite for the song to be awesome. It’s awesome regardless. It’s a great track that’s thoroughly, completely, effervescently punk — Lou Reed would be proud.

The Toronto natives are a special sort of awesome, and have a great sound that is completely reminiscent of punk that came before, but also wholly unique. This is a band who isn’t afraid to be wild with it. Listen to Human: that’s a sound aware of the past, but completely dispassionate about sounding anything like it today. Especially as it gets towards its end and breaks down into its off-kilter bridge.

And while we’re on the topic of Human, let’s be honest and say that Weaves’ drummer is bloody tight. That guy is on. He’s one of my new favourite drummers.

The record is bound together by a consistent aesthetic, but not necessarily by a consistent style. That is to say, while Weaves has a sound all of their own, each song sounds different. A song like Birds & Bees, which reminds me Self (before he appeared on the Shrek soundtrack), sounds like Weaves while still being a completely unique song on the record.

The effect is powerful: a couple listens to Weaves is enough to assert that the band is a wholly original take on a retro genre styling, but also able to craft memorable and unique songs. It’s pure magic — the sort of thing you’re lucky if an artist can do once in their career, never mind on their debut.

Whether you’re listening to the punk-y One More, the jittery Coo Coo, or the panic-laden Candy, Weaves have a sound that’s all their own. It’s one of the most exciting punk albums of the year, and certainly one of the year’s best debuts. It reminds me a lot of the first time I heard Nirvana; the same energy is there.

Weaves is the sort of band you listen to so you can see them live, and I’m really hoping to catch a show soon. This record is phenomenal; I can’t say enough good about it.