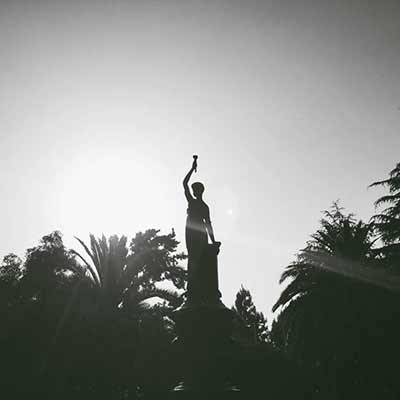 Scenes of the Tourist

Wharfer’s third record dramatically expands the performer’s sound, but it doesn’t do it at the expense of his personality.

“I don’t think I can ever step back in. The kitchen’ll choke me; the bedroom’ll do me in,” Kyle Wall croons on “Rye Wish”, the fifth track of Scenes of the Tourist. Scenes is his third outing as Wharfer, and while the way he makes music has changed, his personality remains the same.

With Scenes of the Tourist, Wall picks his guitar less frequently than he has in the past. Most of the songs heavily feature additional instruments — like the piano, or the electronic sounds of a keyboard.

Wall told me that the vision for Scenes of the Tourist began to crystallize when he moved in to a Brooklyn house with a piano and four experimental jazz/classical musicians. The new style suits Wall’s voice perfectly. As Wharfer, Wall has always had a unique voice among DIY folks groups. Reminiscent of Leonard Cohen, but without the seemingly pre-eminent age that Cohen’s voice came with.

But the new group expands what Wharfer’s voice is capable of by expanding the soundstage. Standout tracks like “Rye Wish” and “The Suitcase” have wider horizons than any of Wharfer’s previous material. The additions create a magical, ethereal quality there’s no way Wall could have created on his own.

Occasionally, some moments are laid back and simpler. “In the Old Magnolia Trees” has a guitar-focused tune, but even it turns into something more spacey by the end. The piano-focused tracks, like “Breeze (Since I Was Born)”, “Blue Lewis”, and “The Wild” all carry the same simplicity of previous Wharfer tracks, but the piano gives Wall’s voice a classical quality.

Nearly every track on the album is fantastic. It’s always an impressive feat when an artist is able to transition from one sound to another. With Scenes of the Tourist, Kyle Wall takes Wharfer in a direction that feels more ethereal and textural than he did previously. But he does all that without sacrificing his vision or his personality. As a result, while Scenes is a bigger record than Wharfer’s ever made, it still feels incredibly intimate and authentic.

I haven’t been able to stop listening to Scenes of the Tourist, an indie record that kickstarts 2017 in grandiose fashion.

Photo above by Justin Camerer.