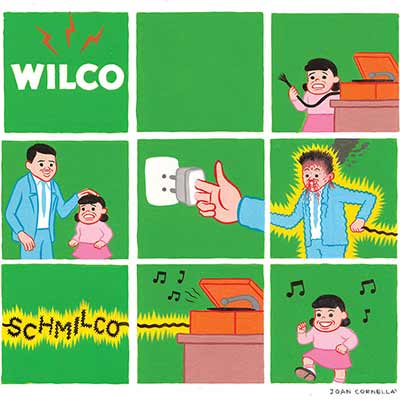 Yankee Hotel Foxtrot is my favourite Wilco record (which makes it one of my favourite records, period). I love every track on it. But its best moments are sad, nearly mournful. “I Am Trying To Break Your Heart”, “Radio Cure”, and “Reservations” are standouts for me.

Schmilco reminds me of those songs.

When the other band members finally get a chance to contribute on “If I Ever Was a Child”, they take a back seat to the acoustic guitar and Tweedy’s voice. Schmilco is a folk record. It’s different. If Sufjan Stevens took over the band, this is the record I would expect them to make.

Not every song is completely downbeat. “Nope” has a playful backbeat. “Someone to Lose” feels like it’s from The Whole Love era — a rollicking bass line carries the song forward, not unlike the best songs from that record.

But the record is at its best when Tweedy and co. are being willfully laid-back and folk-inspired. “Quarters” and “Happiness” (which is obviously ironically titled) are two standouts towards the end of the record.

There are poor songs here — nobody would say Schmilco is the band’s best record — but they’re few and far between. If anything, Schmilco has a good batting average. But it lacks the energy of a traditional record, and that’s going to throw people off at first listen.

As a result, the most legitimate complaint people could have with Schmilco is that the band sounds bored. I don’t think they do — but I think they know that’s the reaction they’re going to get. The title alone is a dead giveaway that they’re certain nobody will care about the record. It’s as if they threw their hands in the air and said “whatever.”

Whether or not you’ll like Schmilco depends on whether or not you already like Wilco. For newcomers, it’s not going to be the best place to start. But if you’re a fan of the band, you’re going to find a lot to like here — despite the album title’s suggestion otherwise.