SUSTO’s & I’m Fine Today is still fresh in our minds from a couple weeks ago. It’s a tremendous step up from their debut that could pole-vault SUSTO to the head of their genre. We sat down with lead singer Justin Osborne to chat about the new record, “cosmic country”, and bridging the political divide with music.

You folks call the music you play “Cosmic Country”. Describe how that style came to be. How would you describe it to somebody who’s never heard of SUSTO?

We used the term “cosmic country”  early on, but I’m not sure we would use that anymore. I felt like it fit what we were trying to do with the first record, we were going for a type of country that was both rough around the edges & far out.

Thinking in terms of the new album, I haven’t really thought of it as a “cosmic country” album until this interview, but I guess in a lot of ways, that description fits & I’m Fine Today better than the self-titled album. There are country or alt-country undertones throughout the album, but it’s wrapped in all these different genres to help keep it fresh and (we hope) interesting. It’s a fusion of roots, electronic, rock, and world music.

& I’m Fine Today is your sophomore album. Now that you’ve been playing cosmic country for a couple of years, have you met any imitators yet?

I wouldn’t say we have encountered imitators, although I hope that we have inspired some people. I mean, I think one of the coolest things about music is that everyone is influenced by everyone. We definitely have some heavy influencers, and it would be an honor for someone to consider themselves influenced by what we are doing.

& I’m Fine Today is a big step up from your debut. It feels like a whole other level, from the songwriting to the production. What’s changed since SUSTO came out in 2014?

I think the more time you spend doing something, the better you get at it. Plus, we actually had the time and money to make this record pretty much exactly like we wanted — within reason. I think that’s why there is such progress between the two albums. I still love our first record and I’m thankful for it, because people really latched onto it. And it made it possible for us to make & I’m Fine Today, to move forward and get better.

I think that continuing the conversation and making art for the sake of social progress is worth pissing a few people off.

You guys are from South Carolina, and I know your hearts are there. In the current political climate, what’s the response been to some of these topical songs, like “Gay in the South”, in the southern states you call home?

The reaction has been what we’d expected. A lot of people are very supportive and are happy to hear music that addresses real social/cultural issues at hand. Others have definitely pushed back. People have tweeted at me saying that I’m going to hell. Some of my family members have stopped talking to me. But you know what, I don’t care. I knew that would happen but I think continuing the conversation and making art for the sake of social progress is worth pissing a few people off.

Trump and others have made a lot of us feel like there are two very distinct sides in this country. I just don’t think that is true. There are definitely far right and far left ends of the spectrum but I think we have a lot of good people in this country (and in the whole world for that matter) that want to find common ground.

There’s a lot of fear mongering out there, a lot of “us vs them” mentality, and our goal as a band is to help combat that. We want to spread love and respect for humanity. We are trying to be a different voice than what people hear on the news or read on Facebook. Hope is a powerful thing. People told me when I was young that, when I got older, I’d realize that the world can’t be changed — that it is how it is and it will always be that way. Those people were fucking wrong about the world and wrong about me.

What’s a day look like for you when you’re on tour?

(laughing) It’s usually pretty boring. We spend a lot of time in the van just getting from one place to the next, or in hotels. This tour we have had a lot more press stuff to do, like this interview + radio, TV & a few in-store performances at record stores, that helps break up the monotony. Still, the best part of everyday is playing the show. That’s why we’re all really out here and that’s what we really enjoy.

We are trying to be a different voice than what people hear on the news or read on Facebook. Hope is a powerful thing.

Any current albums on repeat?

Still listening to a lot of favorites from 2016 (Whitney, Jonny Fritz, JPKS). But I’m looking forward to some upcoming releases this year!

As a band, what kind of legacy do you want to leave?

I hope that we can bring some joy to the world and help bring about some real positive change. Big or small, we just want to help if we can.

Thanks for spending some time with us, Justin! 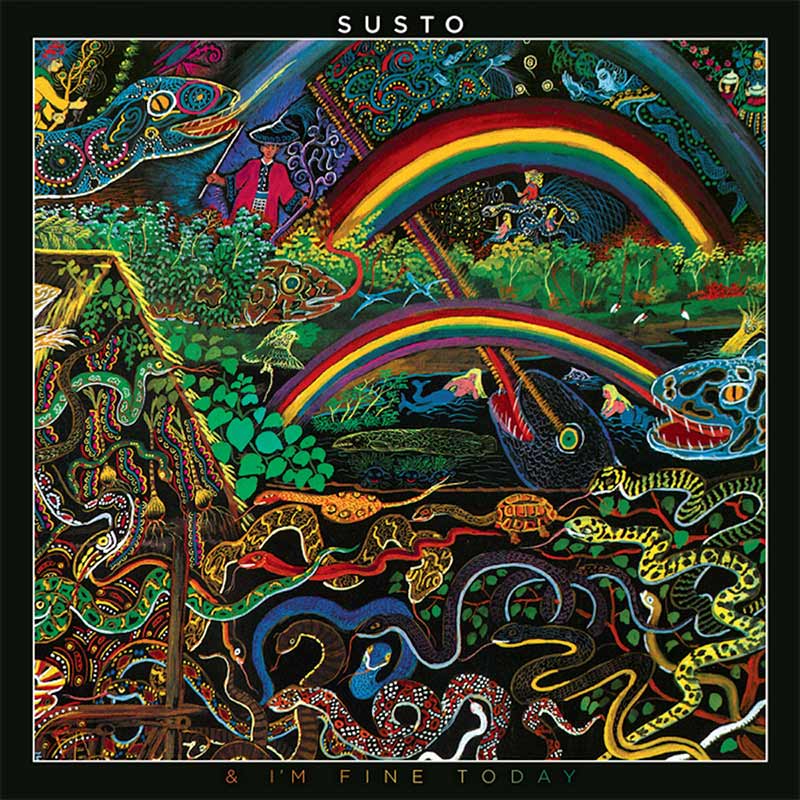 SUSTO's & I'm Fine Today is available today wherever you listen to music.