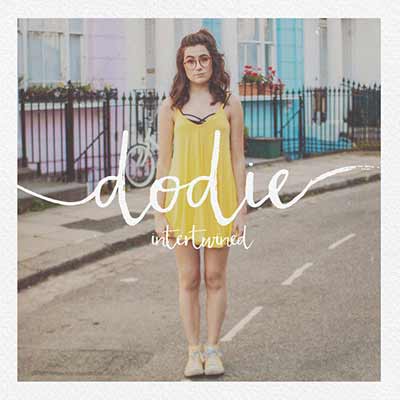 Dodie’s debut EP has a lot of promise. Her beautiful voice, playful attitude, and often fun music help her stand out from the crowd of sad folk songwriters.

I wasn’t originally going to write about Dodie’s first EP, and instead waif for her debut feature-length record. But nearly a month after listening to Intertwined, some of her songs creeped back into my mind. Instantly catchy, this folk rock EP sticks with you well after you’ve listened to.

The big song on this record — the one they seem to think will bring Dodie a lot of attention — is “Sick of Losing Soulmates”, the final track on the EP. For me, I don’t think it’s the money track. It’s got a lot of emotional power, but it sacrifices charm for it.

And to be clear, at her best, Dodie oozes charm. “Intertwined”, the opening track, strongly reminds me of the French folk I’ve heard over the years. (I had to check to make sure it wasn’t a cover of a song I’ve heard before.) The music is familiar, but Dodie’s voice is perfect. Haunting, but filled with youth, Dodie sounds like she’s been performing for years. It’s so surprising that Intertwined is her first EP.

Much of the charm continues throughout the record. “I Have a Hole in My Tooth (And My Dentist Is Shut”) and “Life Lesson” are both under a minute long, but they’re perfect little breaks from the rest of the album and reminders that music doesn’t always have to be serious. And while Dodie spends her time largely meandering in a genre most people take much too seriously — folk — she never takes it seriously herself.

“Absolutely Smitten” takes that fun and makes a full track out of it. I love it. For my money, this is the song from the record they should play at the bars and the pubs. It reminds me of what The Lumineers were doing on their debut record, but Dodie is a much better singer.

For people who are getting tired of listening to the same old sad folk on a loop, Dodie is a refreshing breath of fresh air.

You know what’s great about Dodie? If you like her music, you can find her performing it all in her home on Youtube. She was a Youtube “sensation” before she got signed to a label. And that’s fantastic.

For fans of music, there’s nothing better than seeing somebody’s progression from relative unknown to a label, and then maybe, to success. With Dodie, there’s never been a better way to start tracking with somebody’s journey.