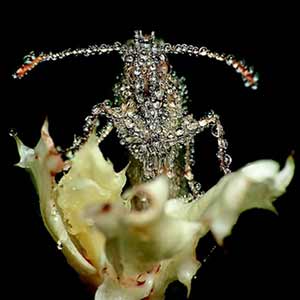 With Eye Contact, Gang Gang Dance flirts with being more approachable than they were on past records — hoping to be a weird alt-pop act instead of the experimental world beat band they’ve been in the past. And while the band is still as weird as ever, they also feel much larger than they’ve ever been before.

Eye Contact is the album where electronic band Gang Gang Dance started making music that was little more focused on being “poppy”. That being said, the opening track is eleven minutes long, so they’re not exactly aiming for radio stardom here.

This record is brimming with all sorts of different ideas and wild verses. It’s also going to be a love it or hate it kind of thing. The vocals are a little out there, and the layered electronics make this feel like some kind of musical zoo. This might be a “poppy” approach from Gang Gang Dance, but that’s sort of like saying elephants sometimes tread softly. This is still an inventive, unusual, not-entirely-approachable record.

And I think that’s a great thing, for the record. I love music like this. Gang Gang Dance are unafraid to experiment, unafraid to try new things, and generally kicking all sorts of butt and taking names while they do it. That’s the best way to make music, and the only reason to do it these days.

In a world where all the sounds have already been made, Gang Gang Dance are offering some unique interpretations of a few of them. And that’s worth the price of admission.