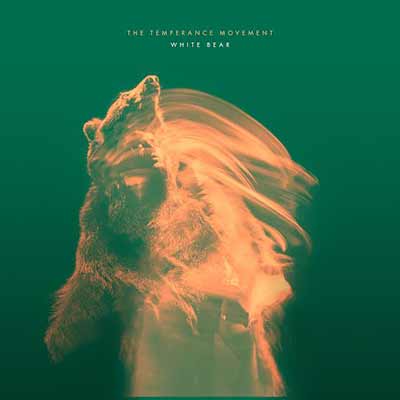 The Temperance Movement improves on their debut record by ratcheting up the intensity and the distortion in their balls-to-the-walls sophomore record, crafting a record that's meant as much for the stadium as it is for the bar. Quintessential British hard rock.

Normally, sharing that sort of information is unnecessary for an album review, but in the case of White Bear, that’s a little different. That’s because White Bear sounds shockingly like a stadium-ready Rolling Stones record. And that’s not a bad thing.

Unlike their first album, The Temperance Movement really dials up the distortion on this record and lets it rip. Almost every track is filled with some sort of gnarly guitar riff. The band sounds like a more sincere, definitely-more-earnest version of Airborne. And the blues rock sound is still intact.

More than once, the band reminded me of Aerosmith. When the band steps out of the post-party, coffee-ridden chorus of Oh Lorraine and digs into the verse, vocalist Phil Campbell sounds like a possessed Steven Tyler. The blues rock riffs that Aerosmith and Rolling Stones frequently shared are alive and well in Battle Lines.

The Temperance Movement is a little more, well, modern, than their throwbacks though. On Modern Massacre, the band lets lose into a tune that would have sounded positively other-worldly forty years ago.

For the record, though, it’s a lot more than the music that’s similar. The guitar tones sound so similar to some of The Temperance Movement’s idols that it’s practically chilling. Every instrument just sounds undeniably — perhaps unapologetically — British (which is awesome, by the way).

None of this is to say that The Temperance Movement sounds like nothing more than a copycat. At the very least, they’re an earnest and sincere band who have almost accidentally followed the same route as bands like Rolling Stones and AC/DC: They got their start playing small and dirty pubs and bars, and eventually landed on a stadium tour. And laid-back blues rock doesn’t work in stadiums; you have to play louder rock and roll. So this is a very natural step for the band; it’s a logical progression.

This is what separates The Temperance Movement from many of their retro-sounding peers. They have a respect for the musicians that came before, they love that music, and the similarities in sounds are all a product of the environment they’re in. In other words, they’re not trying to be throwback for the sake of a buck (unlike their colleagues). They’re just doing it naturally.

I only hope they don’t make us wait another three years for their next record.